Hundreds of Denver’s homeless could be cooling their heels in a movie theater or museum while the Democratic National Convention is in town next month.

The Colorado Coalition for the Homeless plans to get 500 movie tickets as well as passes to the Denver Zoo, Denver Museum of Nature and Science and other cultural facilities for the people it helps.

“We’re trying to let folks know what activities are planned, and what other places they’ll be able to go without being harassed,” Parvensky said.

A two-day voter registration drive is also planned at shelters and health clinics to ensure that metro area homeless people have access to the polls in November.

Backers of the plan say it’s a more sanitary and humane way to take care of people.

But not everyone buys it.

“It just sounds like another way to get rid of them,” said Kayne Coy, 17, who volunteers feeding the homeless twice a week at Civic Center Park through the Food Not Bombs organization.

As for the convention, Coy said: “I’ve heard rumors that all the homeless people are going to be sent away to Aurora or somewhere else.”

Parvensky vigorously denied that there will any attempt to hide the homeless during convention, which runs Aug. 25-28.

Tight security around the Pepsi Center means some homeless people will get booted out of their regular camps along the South Platte River. Then, there’s the protests and parades.

“A person who typically sits under a tree in a park that is now occupied by 1,000 protesters won’t have the peace and quiet they’re desiring,” Parvensky said. “Particularly those with mental illness can’t cope with crowds.”

“Our concern going forward is that the city doesn’t control everything – the Secret Service plays a role,” he said. “We don’t know what will happen if protests get out of control and people get caught up in something they didn’t intend to.”

The first comment on the article really says it:

“What a joke. Why is this happening for just the week of the convention? If this organization was serious, they would have already been doing this.”

Indeed. Regardless of intention, this just seems like a horrendous PR move, no matter what angle you try to approach it from.

Big convention? Let’s clean up this town. Oh, and let’s try to get some of those people off the streets…but, you know – it’s for their own good… So they aren’t bothered by the convention… What interest would they have in a political convention anyway…? Oh, but let’s make sure they’re registered to vote…

Also, as a little side, the last time I was asked if I was registered to vote, the exchange went exactly like this (Steve can back me up on this one…):

“Hey, we’re trying to get Bush out of office. Who are you voting for?” 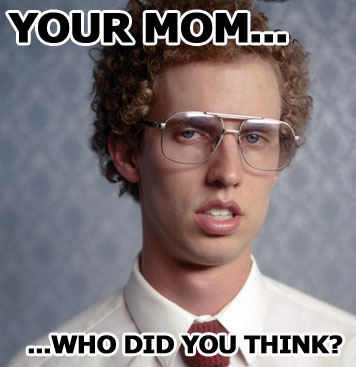 UPDATE – Is the whole thing a hoax??

One of the images picked up (…or, did they do it?!?) by Western Media on Iran’s missile test today – clearly photoshopped: 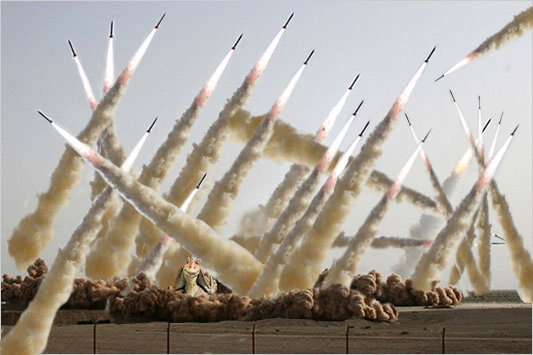 Oh…whoops. Sorry – here’s the real one:

Does our western media pick this up? Nope, a bunch of dudes sitting around on their computers sipping Mountain Dew… Gotta love that!

Also: Perhaps you missed this bone-fide classic from the AFP earlier this year:

Click the image above or go here: Two Bullets in the Hand, One Big Crock of Bull

UPDATE: Well, the Times figured it out this morning (9:33am, that’s about 12 hours at least after bloggers picked this up…)- but that wasn’t quick enough for all the other papers to run it front page:

Here’s the money quote from the NYT story:

“Does Iran’s state media use Photoshop?”

The NYTimes folks are blaming it on the AFP – the same jokes that ran the Magic Bullet Woman story above.

Here’s another great post on this at Snapped Shot.

I have added emphasis to a couple elements from the following story (read the full WSJ article here):

DENVER — As the Mile High City gears up to host a Democratic bash for 50,000, organizers are discovering the perils of trying to stage a political spectacle that’s also politically correct.

The host committee for the Democratic National Convention wanted 15,000 fanny packs for volunteers. But they had to be made of organic cotton. By unionized labor. In the USA.

Ditto for the baseball caps. “We have a union cap or an organic cap,” Mr. DeMasse says. “But we don’t have a union-organic offering.”

Convention organizers hired the first-ever Director of Greening, longtime environmental activist Andrea Robinson. Her response to the mayor’s challenge: “That terrifies me!”

To test whether celebratory balloons advertised as biodegradable actually will decompose, Ms. Robinson buried samples in a steaming compost heap. She hired an Official Carbon Adviser, who will measure the greenhouse-gas emissions of every placard, every plane trip, every appetizer prepared and every coffee cup tossed. The Democrats hope to pay penance for those emissions by investing in renewable energy projects.

Perhaps Ms. Robinson’s most audacious goal is to reuse, recycle or compost at least 85% of all waste generated during the convention.

To police the four-day event Aug. 25-28, she’s assembling (via paperless online signup) a trash brigade. Decked out in green shirts, 900 volunteers will hover at waste-disposal stations to make sure delegates put each scrap of trash in the proper bin. Lest a fork slip into the wrong container unnoticed, volunteers will paw through every bag before it is hauled away.

“That’s the only way to make sure it’s pure,” Ms. Robinson says.

Republicans are pushing conservation, too, as they gear up for their convention in Minneapolis-St. Paul. Like the Democrats, they’re cutting down on printing by doing as much work as possible by email; using recycled office furniture; and urging employees to walk or take public transportation to work. The Republicans also encourage vendors to be as environmentally friendly as possible.

But Matt Burns, a spokesman for the Republican convention, looks on with undisguised glee at some of the Democrats’ efforts — such as the “lean ‘n’ green” catering guidelines.

Among them: No fried food. And, on the theory that nutritious food is more vibrant, each meal should include “at least three of the following colors: red, green, yellow, blue/purple, and white.” (Garnishes don’t count.) At least 70% of ingredients should be organic or grown locally, to minimize emissions from fuel burned during transportation. “One would think,” says Mr. Burns, “that the Democrats in Denver have bigger fish to bake — they have ruled out frying already — than mandating color-coordinated pretzel platters.”

Joanne Katz, who runs the Denver caterer Three Tomatoes, will take one for the green team by removing her fried goat-cheese won tons with chipotle pepper caramel sauce from the menu. But she questions whether some of the guidelines will have the desired earth-saving effects.

Ms. Robinson, the greening director, says big showy conventions are part of the American political tradition, and thus worth a few emissions here and there. Also, she hates to be a killjoy.

True, she did try (unsuccessfully) to get bottled water banned from the convention hall. But remember those balloons? She checked the compost heap last week — and found them still intact. She has added more liquid to try to get them to degrade.

And if they don’t? “The balloons will be there,” she promises.

So will the fanny packs — made in the USA of undyed, organic fabric. Mr. DeMasse vows to get a union shop to print the logo, but he says the ink will be petroleum based. Unless, that is, he decides to get the logo embroidered — with biodegradable thread.

Is this a freaking joke? Greening director…? Official Carbon Advisor?

This is just a little picture of the world environmental activists want to create (hint: totalitarianism). There are people who need desperate help here in this nation and around the world – and yet we’re too busy burying celebratory balloons in compost heaps, “protecting” people from un-colorful french fries, and digging through garbage looking for accidentally tossed forks…

This calles for some Mark Steyn:

The biofuels debacle is global warm-mongering in a nutshell: The first victims of poseur environmentalism will always be developing countries. In order for you to put biofuel in your Prius and feel good about yourself for no reason, real actual people in faraway places have to starve to death.

Whether or not there’s very slight global cooling or very slight global warming, there’s no need for a “war” on either, no rationale for loosing a plague of eco-locusts on the food supply. So why be surprised that totalitarian solutions to mythical problems wind up causing real devastation? As for Time’s tree, by all means put it up: It helps block out the view of starving peasants on the far horizon.