“Stephen, speaking as a foreigner, I confess I’m finding it harder and harder to see why you fellows bothered holding a revolution. Under this bill, it will be illegal for me to sell my property to a willing buyer without first bringing it into line with some twerp bureaucrat’s arbitrary and ever shifting “environmental” regulations originally designed for California, and which have helped turn the Golden State into the foldin’ state, but which are nevertheless now to be applied from Maine to Alaska. And no matter what you spend a couple of years down the road the standards will be “revised” and you’ll be out of compliance all over again.”

Second – Read this rundown on Section 304 of the recently passed Cap and Tax Trade legislation. Warning: Your brain may explode.

No doubt AT&T will still charge you a Quarter per MMS you send AND RECEIVE with their amazing Grab-Your-Ankles Data Plan – which does not include text (and likely not MMS, when it is available…late this summer.)

Therefore – AT&T wins their second (yes, they count as Cingular – one and the same…) Jar-Jar Award for Raising Teh SuXX0R!

Read my full discussion of this at Appeal to Heaven.

This just in from KMTR

EUGENE, Ore. (AP) – A University of Oregon professor says the huge yellow “O” on Autzen Stadium is an eyesore for her neighborhood.

McKay Sohlberg’s complaints have led to a May 13 hearing over whether the university has the proper permission to put the “O” on the south side of the football stadium.

Originally, the 816-square-foot “O” was hung by the athletic department for a national television pre-game show. But it stayed after the TV crews had gone.

Sohlberg says the city should have applied for a permit or an exception before the “O” went up.

The Eugene planning director ruled the sign was an exception to the code in March. But Sohlberg appealed to a hearings officer, the next step.

I’m no lawyer, but I’m pretty sure that McKay Sohlberg doesn’t own the Autzen Stadium property. When she bought her home in the neighborhood, did she buy a guarantee that Autzen Stadium wouldn’t put up something she thought looked bad?

No. No she didn’t. She bought the property AND the risk that the Stadium might put up a giant O.

Would she appreciate it if the owners of Autzen Stadium appealed something that she was doing with her property? No.

If she has a problem with it, maybe should should consider buying the property from Autzen Stadium – rather than trying to get government to force Autzen to do whatever she wants with their property.

Actually it’s not a “principled fight.”

This years Keynote Speaker at PISSAR

UPDATE: Other variation of the towel spotted: 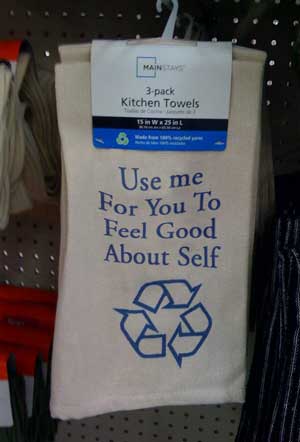 Who actually pays the taxes in America?