The Chicago Way – Obama attempts to silence Kurts, rather than debate

Yesterday, the Obama campaign tried to squelch a radio show for having on conservative writer Stanley Kurtz.

Powerline has the skinny:

Stanley Kurtz is the academically minded senior fellow of the Ethics and Public Policy Center who has doggedly investigated the Chicago years of Barack Obama. Most recently, Kurtz has been seeking to reconstruct the relationship of BarackObama and Bill Ayers via the papers of the Chicago Annenberg Challenge held by the University of Illinois at Chicago. Kurtz has painstakingly documented the obstacles thrown up to his review of the documents.

Now his efforts have struck a nerve at the Obama campaign, which has viciously lashed out at him as a “slimy character assassin.”Last night Chicago’s own Milt Rosenberg hosted Kurtz for the duration of his WGN 720 show. The Obama campaign declined Rosenberg’s invitation to have a reapresentative appear with Kurtz on the show. Rosenberg has made a podcast of the show available for download here.

The Obama campaign also sent out an email to supporters to call in an attack the show (politico):

The campaign e-mailed Chicago supporters who had signed up for the Obama Action Wire with detailed instructions including the station’s telephone number and the show’s extension, as well as a research file on Kurtz, which seems to prove that he’s a conservative, which isn’t in dispute. The file cites a couple of his more controversial pieces, notably his much-maligned claim that same-sex unions have undermined marriage in Scandinavia.

“Tell WGN that by providing Kurtz with airtime, they are legitimizing baseless attacks from a smear-merchant and lowering the standards of political discourse,” says the email, which picks up a form of pressure on the press pioneered by conservative talk radio hosts and activists in the 1990s, and since adopted by Media Matters and other liberal groups.

“It is absolutely unacceptable that WGN would give a slimy character assassin like Kurtz time for his divisive, destructive ranting on our public airwaves. At the very least, they should offer sane, honest rebuttal to every one of Kurtz’s lies,” it continues.

Hmm – Is that in-fact not an answer but a direct ‘character assassination’ of Kurtz???  Full text of the email here.

You can listen to the radio show here by the way (LGF).

The experience was surreal, amusing, and chilling. In a matter of hours, a major national campaign had called on its legions to bully a radio show out of airing an interview with a legitimate scholar asking legitimate political questions. Coupled with the Obama campaign’s recent attempts to sic the DOJ on the creators of a truthful political advertisement —which also happened to feature Obama’s relationship with an unrepentant terrorist— last night’s call to action represents an emerging pattern. Any criticism of Obama’s unknown past is to be immediately denounced as a “smear,” and the messenger is to be shut down at all costs. …

Team Obama is fast becoming the campaign that cried “smear.” They labeled the National Right to Life committee “liars” for providing evidence of some unpleasant facts about their candidate’s record on a series of infanticide votes. This tendency to lash out and engage in baseless name-calling not only smacks of desperation; it also may foreshadow an Obama presidency’s strategy in handling unfavorable media reports and sources.

Ed Morrissey has the wrap up:

Team Obama has become so overwrought at the mere thought of criticism that they now overreact on a constant basis.  It’s a measure of the fear in the campaign that they have decided that they cannot abide any criticism at all, and instead of simply responding to it, they attempt to silence it instead.  Worse, they seem to believe that the Department of Justice is a great tool for oppressing such criticism — while Democrats accuse the Bush administration of the same, which much less evidence for their allegations.

And in this case, what has Kurtz done?  He has demanded access to records that should have been public all along to investigate the workings of a program funded at least in part by public funds.  Kurtz wanted to check the records on Obama’s denials of a close working relationship with Weather Underground terrorist William Ayers.  In other words, Kurtz attempted to commit the crime of journalism, a crime that seems rare enough as it is when it comes to Obama and his past.

Maybe other journalists should take heed.  If Obama becomes president and they commit the crime of Journalism in the First Degree, how will these same people react with the full weight of the federal government behind them?   If they stoop to character assassination now, what will they do when they have much more powerful tools at their disposal?

This whole thing blows me away. Listen to the radio show audio. Do those people sound like crazy wack jobs hell-bent on destroying Obama? Of course not! Kurtz is simply asking questions and doing an investigation of public records to see if they back up Obama’s claims. This is something that must be done for both candidates.

Obama could have easily sent someone to debate Kurtz on the show. Instead – he is attempting to bring the the Department of Justice (against the American Issues Project that ran an Ayers ad) into the picture which seems to me to be a direct attempt to destroy free speech. You can scream all day slanderous thing about President George W. Bush – but ask a few questions about Obama’s public record and suddenly there’s a criminal investigation, and a mob shout down at a radio show…?

Hugh Hewitt had Kurtz on the show today. Again, listen and decide for yourself if Kurtz sounds wild and unreasonable. Here’s the audio:

The best indicator of the effectiveness of the pick was the Obama Team’s first response:

OMG! We should have picked Hillary!!!!

“Today, John McCain put the former mayor of a town of 9,000 with zero foreign policy experience a heartbeat away from the presidency. Governor Palin shares John McCain’s commitment to overturning Roe v. Wade, the agenda of Big Oil and continuing George Bush’s failed economic policies — that’s not the change we need, it’s just more of the same.”

Ouch. “I must have hit her them pretty close to the mark to get her them all riled up like that, huh, kid? – Solo

Later they realized that probably seemed a little knee-jerk and issued the damage control reaction:

“We send our congratulations to Governor Sarah Palin and her family on her designation as the republican nominee for Vice President. It is yet another encouraging sign that old barriers are falling in our politics. While we obviously have differences over how best to lead this country forward Governor Palin is an admirable person and will add a compelling new voice to this campaign.”

Like I said above, interesting choice – certainly mixes things up with many pros and cons. Ed has a great rundown here. This is no doubt, one crazy election year! 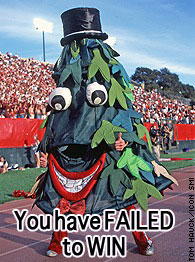 Sad ending to the game. Similar to the Oregon – Cal game last year…except – this one lost to the universally hated dancing moron. Though a Duck myself – I understand the pain.

It’s nothing personal Senator Obama, but I’m afraid I fundamentally disagree with your stirring the pot of class envy. Painting people as victims, in my view – is one of the most destructive and irresponsible things in America politics today.

You can, and should read the transcript of the speech.

I built a website for the house I lived in during college and took a bunch of photos for the tour section of the page. Somehow – one ended up as a backdrop in The Daily Show the other day…

http://www.thedailyshow.com/full-episodes/index.jhtml?episodeId=179249 It’s about 3:30 into the clip.

If you go to the AO House Tour and scroll down to living spaces (click the image below):

How many billions of TV room pictures do you think there are on the Internet?

What the crap? Comedy Central – ever head of istockphoto.com? I think royalty free picks on there are about 2 bucks…

Cross posted on You Thought We Wouldn’t Notice.

Who are the 47 million Americans who ‘don’t have health care?”

In 2006 the U.S. Census Bureau reported that 46.6 million are people without health insurance. You hear this number all the time today in discussions on what our public policy should be towards health care (particularly – socialized healthcare). But who are these 46.6 million people? Here are a couple things you probably won’t hear from politicians, whether Democratic or Republican:

Here are a couple other statistics about healthcare in Canada and Europe:

Some other important items: