Recent scientific discoveries have unveiled the possibility of a second digestive track in humans. 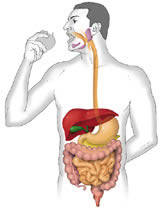 Above you can see the Normal Digestive Track. As you can see, ingested food items proceed down the esophagus to the stomach where they are dissolved over a matter of hours. Then the food passes down through the rest of the system and the useful stuff is absorbed and used for energy. The waste is expelled. Most things you eat pass through this system.

Here you can see the Coffee Digestive Track. This system bypasses all of the other organs with what is scientifically known as the Hyper Speed Mega Flush Digestive System (HSMFDS). Approximately 99.675% of the ingested items are not digested in any way, shape, or form. Often, the ingested items reach the body’s expulsion unit at nearly explosive sub-light speeds. It also seems apparent that the HSMFSDS enters a hyperactive state, sometimes quadrupling force and speed during movies and car rides.

Please let me know if you have had any personal experience that might confirm or deny the existence of the HSMFDS.

One Response to “Discover Your Second Digestive Track”